My name is Jeff Jones. I'm a cyclist committed to the non-suspended bicycle. My ideas and passion have created an exceptional ride - a trail-blazing geometry that delivers superb handling, comfort and efficiency. My bikes are available in titanium and steel, to be ridden off-road (and on) for exploring and racing, adventures and fun. They are outrageously responsive bicycles - frame and forks designed in harmony to provide a rigid bicycle that is anything but. A pure cycling experience like no other.

Login to check your balance or redeem rewards 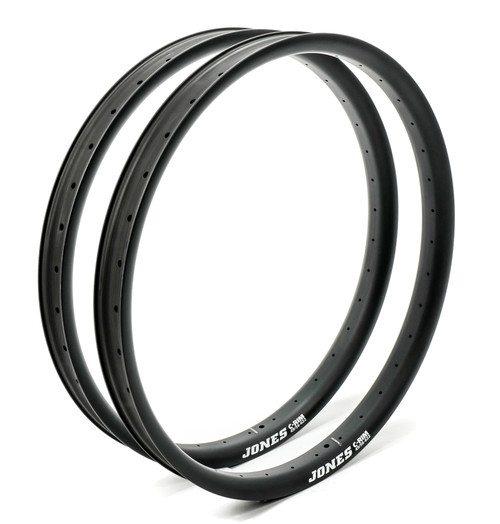 Available in 32 and 36 hole versions, centered drilling or offset

The Jones C-Rim combines the light weight and strength of carbon fiber with a 56 mm outer and 49 mm inner width, a hookless design, pronounced bead lock, and 3.5 mm rounded sidewalls for almost absurd strength as well as a profile that protects the tire under hard impacts. The wide, 49 mm inner width spreads the tire's beads, making for a tire that folds over less at low pressures while corning hard and resists bottoming better during hard impacts. The rim has a very pronounced bead-lock for reliability when run tubeless. At 595 g (average) for the 32 hole version and 642 g (average) for the 36 hole version, the C-Rim is about 100 grams lighter than the most comparable, but narrower, aluminum rim and may just be the strongest rim ever made.  Jeff spent a lot of time getting everything just right: the spoke holes are drilled at an angle that matches the angle of the spoke nipple. This allows the nipple to pull straight in line with the spoke, reducing stress. The 6 mm offset of the off-center drilled rim allows for more balanced spoke tension when used with asymmetrical-such as most rear and some front-hubs. We've been riding the widest rims that our manufacturer made previously pretty extensively, and we've found them to be very durable, but they don't have the width or the sidewall profile that we wanted, so this rim not only gets those features, but it also gets a deeper profile which increases strength even further. During their in-house testing, our manufacturer found this to be the strongest rim they had tested, and during our in-house (and outdoor) testing, we've found it to be able to handle anything and everything we've been able to throw at it.

While the Jones C-Rim is designed to be the best Plus rim around, it also works great with tires down to about 2.3” wide, where it will spread the beads apart to maximize air volume and tire stability.

By using the C-Rim with centered drilling and a hub with flanges that are spaced widely and evenly, such as the Jones 150-F Hub, you will have a super strong, dishless front wheel, which can then be paired with a rear wheel built around a 148 mm x 12 mm rear hub in combination with the 6 mm off-center drilled Jones C-Rim to create a near dishless wheelset. Having a dishless wheel means that you have even spoke tension on both sides of the wheel, making the strongest possible structure: yet another reason why the Jones C-Rim will help make the strongest wheelset around!

Check out a video of some early testing on the C-Rim here!